well folks it's that time again where i dump the things i've seen/heard/tweeted/texted oh and talked about recently...

Possible mortgage fraud??? john lewis said it best when he spoke to hu’s graduating class of 2006 (my class!!) by simply saying, “it’s bigger than you”! contrary to what some may believe there’s def a world outside of your personal buppy cocoon, outside of wall street, outside of the hill, etc. the (bad) decisions made by a few effect all of us. I’m still going to grad school, but since economy’s sketch guess I have to take even more time (or actually start) to see what grants/loans are still available. Also, at my kid save meeting on Monday, they mentioned how a lot of adoption/foster care organizations in the area were nervous pervis about the upcoming year since freddie mac foundation funded most of them :(

i'll admit it, i don’t know much about racing except ralph dale earnhardt jr, the president of FIA (max mosley) is into kinky nazi sex, & lewis hamilton is a-d-o-r-a-b-l-e!... apparently he was on trial, but lost the appeal

Pull it together mccain campaign! Apparently the lobbying firm of rick davis, mccain’s campaign manager, was on the payroll of freddie mac up until last month (read article)

oh, the japanese are always reaching for the starts…literally! apparently scientists in japan are trying to build an elevator to the stars


Ok, enough of that on to the real news:
speaking of japan… I was reading my time mag on the train this am 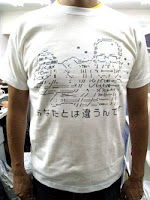 (trying to hurry and read all the mags I subscribe to give em to a coworker for her kid’s school) I came across a piece about “what they’re wearing in japan”. Since I used to be obsessed with tshirts, thought it was cool they profiled a shirt (pic on right) which apparently was created after (outgoing prime minister) Yasuo Fukuda replied "I can see myself objectively. I'm not like you." to a reporter who asked if he gave his time in office his all.

Peta asks ben & jerry to use human breast milk in their ice cream instead of cow’s milk ... is it just me or are there bigger fish to fry?? no pun intended peta i don't fry fish, i bake it :)

Sex on tracks will break your back? is it ever that serious?? i think not!

Came across this yesterday, and thought it was touching so wanted to share... pics of how kids in mexico view the drug problem

Per diana ross’ 80s hit “I’m coming out” apparently stars are finally ready to let their business all hang out...clay aiken (clearly) & lindsey lohan came out recently. side note: seems like it would've been fun growing up in samantha ronson’s family, so much creative talent… now I’m just waiting for anderson cooper to admit it, but I doubt he will!

lastly, a pic is worth 1,000 words, not $3million loser! even if you're at a diddy party, you must not let yourself go and be mindful of paparazzi... especially if you're a hedge fund manager these days

songs of the day:
cool kids (such a great duo): black mags
sam cooke: a change is gonna come
at 10:13 AM