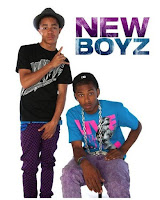 the name "new boyz" says it all. they're a new rap duo & they're young, but their style is funky/trendy which is why you gotta put a z at the end and not an s!

these new kids on the block sound like the pack to me, but there're only 2 of them. they're from la so totally wanna pick up some music when i go to the westcoast next month!!

their myspace page has snippets from a few other songs which sound really cool. not sure how many songs they have out, but this is out in dc/md: