spent the day in southern maryland (about 2.5 hrs away from my apt)... working on a boys & girls club project for work, so went to camp brown to see the kids put together out prevention videos/commercials...

since i was in and out my service was too (thanks tmobile). on my drive back home got a call from bff in nyc saying her boyfriend was concerned smoe & i were in a metro train crash in dc! i'm super confused bc i hadn't heard about it at all. crazy bc normally i would be on the red line coming home from work. got a lot of calls from out of towners to make sure i was ok. weird bc all of my local friends either texted or bb messaged me- maybe dc/md/va folks are too cool to call me?! 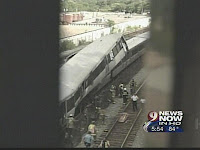 above is a pic from twitpics someone got from the news...not sure if you can see but 1 train is LITERALLY ON TOP of the other! was talkin to a friend who heard a lady sitting 3 cars back was still bumped to the ground, so she's not a fan of sitting in the front cars! what sucks most is that it was rush hour, so like most rush hours on public transpo that means a rack of people standing up and piled into cars! anywho unfortunately, thus far there's been (sketchy) reports of 4 dead & like 70+ injured. judt glad i'm finally home so i can check twitter & watch the news!

lastly, chris breezy gets off w/ 5 years probation & community service for beating down rihanna?? good ole justice system, eh? heard it on the radio and i have no words, but here's the bbc article i just read about that whole situation.
at 7:59 PM