let the games begin... ok more like festivities begin for eden. not crazy about the name, but i've never been on homecoming committee so can't talk; i'm mad the video on the homecoming site is so serious!!!!

we went to mccxxiii (1223) for the fashion show after party last nite... met my friends in the super long line (apparently they were there for almost an hour), went in & realized there were more folks in line than in the actual place (hate when places do that so it can look like it's the place to be)... everyone was on the 3rd floor & ended up running into some folks i knew. coolest part is that i knew the dj (he was my year at hu). it's cool to see someone doing well & achieving their dream...

election coverage-
don't really feel like talking about last debate b/c everyone's torn it apart & the subject feels a bit hackneyed now... plus though it's my blog i like staying neutral on most topics.

with this said, i burst out laughing when smoe said it looks like obama's been, smoking everything under the sun b/c of the color of his lips. i loved mccain's antics (body language, smirk, sly remarks)... i'm sure this was 1 of the most popular pics on the web yesterday & me likey so i had to include it: 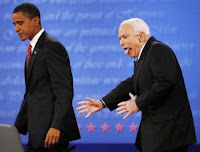 and now it's time for his 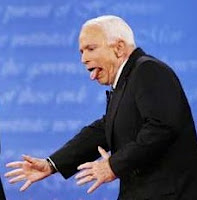 was sent the following video this am & it's amazing that some people believe barack is an arab & did being arab become a kiss of death after sept 11, or has it always been like that?? i personally like arabs. i was telling someone every other time some news channel is reporting on a bomb or suicide attack & there's a group of mugshots i often think 1 of the guys is cute... think whoever i was talking to called me "sick" or agreed, cant remember :)

in other news-
also, as bbc is 1 of my 5 homepages that pops up when i get on the internet, i saw a super interesting story. it was all about peter norman. he's the other guy that was on the olympics award podium when tommie smith and john carlos threw up the black power fist... (b/c bbc is amazing) in addition to having eye opening stories such as that, they also have really essential news such as "the leggy blonde" being pregnant w/ a calf turns out it not about a hot chic & bestiality, but the 1st asian pachyderm (hence leggy) to be artificially inseminated (hence preggers); it also has tufts of blonde hair (hence blonde)!

learned a new word yesterday too: septuagenarian (a person who is 70 years old or between the ages of 70 & 80)... yeaa for learning! too bad i feel like my spelling is getting worse b/c there are systems to finish my texts & spell check & abbreviations, o well...