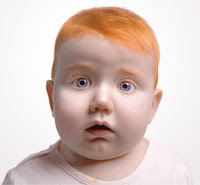 i've always said if i was white i'd be a redhead. not sure why, but it just seems right :) so i was thrilled to hear (literally b/c i was listening to talk radio) about an exhibit dedicated to "gingerism". it's called root ginger: a study of red hair by jenny wicks.it's in london so i won't be
going, but seems really cool! (pic courtesy of Lucie Wicks, © Jenny Wicks, Root Ginger at Idea Generation Gallery)
as a black woman, i truly value my natural hair (though i dislike having to do it) as it makes me feel connected to my ancestors. i made the choice a few years ago when i decided i’d rather leave it alone than to manipulate its state through perming, coloring, etc. whether it’s in

braids or an afro it’s like a badge of honor when I wear it in different styles that other hair textures could not pull off. i wonder if red heads feel this sort pride in their hair... i doubt. though gingerism isn't as bad as it use to be decades, centuries ago, still think its a little odd for some to see a red head. me? no, i loooove red heads, think there should be more! here's an old article from bbc .

so again won't be going to london to see wick's exhibit open next month & it turns out i'm also not going to peru. peru? yes yes random i know, but a friend told me about a $400 roundtrip special to peru so we were gonna do it b/c .well, it's cheap! i was gun ho until yesterday when i was laying around watching the news & saw ALL of the layoffs happening... then i felt guilty for traveling around while families/individuals were struggling in these "hard economic times". so i made the (responsible?) choice, went w/ my gut & decided not to go. i'm not hurt b/c peru wasn't on my list of places to go (though it does seem like an interesting place & now it is on my list), plus i'll be in south america next month so no biggie! plus my savings account thanks me :)

in honor of some 60,000 jobs being cut across the U.S. i offer my prayers & some inspiration from the Evans family...

song o the day: good times intro. don't like what the video is called in you tube (partially b/c i don't like the word "ghetto" & partially bc it seems unecessary), but still a great song & a darn good show. i used to wanna be thelma or willona, not so much florida (but esther rolle is awesome). exhibit a of how awesome she is: damn daaaamn daaaaaaamn. oh the drama, i felt that, did you? you could cut the tension w/ a knife :)

We've got an interview lined up with Jenny Wicks - please let us know any questions you'd like us to ask her by posting them here: