so this year for v day i don't wanna do any of the traditional lovey dovey things & i don't want an average gift. in fact i know exactly what i want waiting for me the morning of feb 14th:
the batter blaster! after watching that video, how can you not want one? waffles?!!!!

in other news, is it just me or was mike steele being picked as chair of RNC a bit predictable?? or

is it predictable of me to assume that every black man/woman getting ahead in 2009 is a direct result of the obama effect*?? naaaah, i think the RNC has a huuuuuuge pr & morale issue so by making history and electing the 1st black man as head it shows, "see we are inclusive"; "barack the magic negro, a thing of the past no worries now"; "the star spanglish banner was a lil latino humor, 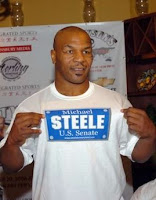 we looooove immigrants"... i swear if mike steele gives that line of how the republican party freed slaves and gave blacks their civil rights i'll throw up & write him a letter (after cleaning up my waste). ok maybe i'm beeing too hard on mr steele & RNC. i guess if mike tyson endorsed you in the past you've gotta be a dynamic man, right?

*can i coin this term, has it already been used?

song o the day: in these "tough economic times" i wanted to honor the gap between the haves & the have nots i have 2 songs. same title, both great songs. (1) money by the beatles & (2) money by pink floyd
at 9:13 AM