so my thursday consisted of me waking up in chicago... presenting at program meeting and

board meeting... running to a taxi... running to check in at ohara...hopping on flight...hopping off flight at reagan... running to baggage claim...hopping into smoe's car...driving to movie theater at gallery place/chinatown... saving seats for folks at midnite showing of star trek...actually watchin the movie!

1st reaction was that i'm super jealous at the relationship spock & uhura had in the movie- i wish i could date that vulcan :) smoe shook his head after i said this. in addition to smoe, saw it with my trekkie friend & his lady friend. he gives it 3.5 stars 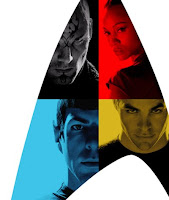 looking on twitter kept reading super great reviews about how awesome it was and super fantastic... actors did a great job, especially the folks who played spock, scotty, sulu & mccoy! i purposely went into the movie with no expectations. overall the movie was good. it wasn't 100% true to star trek's core, but it did its job of bringin the franchise back in a major way and, maybe more importantly, introducing it to new generations (or folks who never woulda seen the show, but liked the hollywoodize movie).

bc i wasn't the movie's #1 fan like everyone else i felt out of place and like i missed something, so asked my trekkie friend his thoughts. he said that he was a lil worried about the updated version bc star trek isn't about action. the graphics and high energy was cool, but it's supposed to be philosophical and thought provoking.

i totally agree and think something gets lost in translation... however overall jj abrams did a good job and i'm oh so glad star trek is back in everyone's thoughts, hearts and conversations!

saw the following clip from the onion on friday & thought it was hilarious bc i'm turning into 1 of these people: