My disappointments of the week…& bright sides 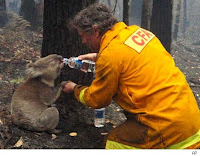 -- Australlian fires!…this is a huge bummer. Read somewhere folks were burned as they were in traffic trying to escape, some as they were on the phones w/ loved ones & all you could hear were their screams… reminiscent of Pompeii.

-- A-rod! Def not surprised, but sucks he can’t even be charged or receive any punishment. Apparently he donated 3.9 mill to the University of Miami to name the new baseball field after him… hopefully he’ll never be admitted into the hall of fame… o, wait another baseball guy lying to congress?? miguel tejada is guilty...

-- Chris breezy & rihanna! Are you serious guys?? Really?? I hope the charges aren’t true, if they are rihanna needs to leave & get help & chris brown needs to be jailed then get help. I cringe every time I listen to one of their songs now or see a happy-couple pic of them. Saddest part is, a radio station was talking about it Monday nite & some dc, md, va youngins were calling up to the station & saying it’s ok, maybe he just got made this once & totally excused his actions b/c of his status. NOT A GOOD THING LIL GIRLS (& GUYS)! NO ONE SHOULD EVER PUT THERE HANDS ON YOU, REGARDLESS OF WHO THEY ARE! In other interesting news, apparently he did an interview w/ Giant mag in 07 where he said he had thoughts of killing his abusive stepfather after witnessing his mom getting beat up a lot.

getting away w/ a lot), but I think we need to give mike phelps a break…. Kellog pulled out completely, speedo is stickin to him like… well, like a speedo. Are there any other endorsements I’m missing? Apparently he already had a dui charge in his past (and kellog still endorsed him). He’s been suspended, what more needs to be done?? Maybe if/when I see the pic w/ my own eyes I’ll change my mind on this. Also, it could be that I’m slightly sexes b/c I’m in favor of anyone who’s body is as sleek as this ---->

-- Octuplet’s mom! No income + 14 kids + $50,000 in (alleged) student loans + on welfare b/c there’ll be an estimated millions of dollars in future medical bills= $300,000 in a today show interview. ‘nuff said. I’m speechless on this situation & want it to stop making news. this is my 1st (and last) time talkin about it

-- Good ole ward 8 council member marion barry… in addition to not filing/paying taxes (who does he think he is, an obama appointment?) now he needs a kidney transplant! Barry like a family member, who just can’t seem to get his crap together. You’ve given him more than enough chances and have made more than enough excuses for his improper behavior, but at the end of the day you can’t cut him off completely b/c he’s family… dc, it’s time to cut the chord. Ya gotta let this one go (sink or swim)!

Bright sides:
-- Apparently, the “Manhattan Madam" (Kristin Davis) wrote a tell all book! Good for her. For some reason this is more interesting to me than superhead’s (karrine steffans) tell-all book. Maybe b/c music is my boyfriend & it’s flaws are easily seen so i don’t really need/wanna all the rappers, entertainers (& athletes) she’s slept with. Kristin davis’ book is interesting b/c I like to see political, business titans fall, or at least

-- The g-r-a-m-m-y-s!! some of the performances were mediocre, but I love music so would have enjoyed watching it on mute! 1 of my fav performances of grammy history would def be swagger like us… gotta love m.i.a. for performing on her due date, in high tops & polka dots (real 80s)! and such a fine, diverse, big-egoed cast of rappers who came together on the song.

-- J simpson! (no homo) but I think she looks much better thicker than skinny minny. Then again, I’m a black woman & I’m not famous so my idea of a beautiful body type is a smidge different than Hollywood. though I’m a fan of her new look, i'm not a fan of her vocal break down on stage during the rascal flatts tour :) Keep going Jessica, don’t listen to them, you look great!

song o the day: kanye: i'm christoppher columbus y'all just the pilgrims"..."my swagger is mick jagger"; jay: "no 1 on the corner got a bop like this, can't wear skinny jeans b/c my knots don't fit"... "you can pay for school, but you can't buy class"; wayne: "i require what i desire, i got stripes adidas"... "what the f- you boys talkin bout, i know it's us 'cause we the only thing to talk about"; ti: surprisingly, ti's verse is the best b/c it's consistently good. no lines to highlight on that one, a thorough verse.