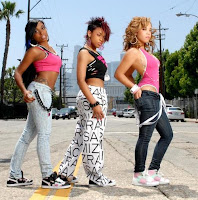 as i always say, maybe not "new new" but new to ME! how did i find them? was checking out music on necolebitchie.com, mainly that somehow teyanna taylor (my fav!) & kelly rowland had the same song lined up for their 1st singles... the post later mentioned a song called superbad that diamond & sophia fresh both did & produced videos for (the latter's video below).
like how hype they were in their video so i thought i'd explore more... i also appreciate when folks dance & don't do the i want to stand around in designer clothes and sell my sexiness angle. don't get me wrong they still are working the young pretty girl sexy angle but at least it's active (ok i'm biased bc i love dancing!) sophia fresh myspace. their official website is sensory overload w/ all the colors, but it's cute
at 3:57 PM