just got in from brazil last night, so recouping right now (meaning sleeping all day, easing back into eating solid food & watchin man v wild). bear is rugged cute...not so much when he kills & eats rabbit on a stick as he's doing now though!
just changed fbook profile pic to 1 representing carnaval & felt like i should do final thoughts: 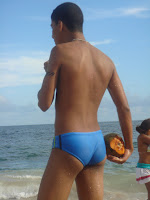 - learned to be more confident in your skin/body. don't have low self esteem, but def don't let it all hang out & i'm more covered than not. well not anymore! brazilian women wear the cutest outfits (weather its a scantily clad bikini, or a nice sun dress) they wear their clothes well regardless of size/shape. i'll def adopt this attitude this summer... o & they wear hammer pants, but its super cute. didn't have time to buy any so i'll search for em this week. (this pic is of a man we saw at the beach... even the guys were super confident as a lot of them wore speedos & were gut out all day- i saw A LOT of male butt cracks too)

- be mindful of not so safe food handling in other countries. i've been blessed to travel abroad several times, but morro de sao paulo was the 1st time i got sick! it was TERRIBLE!!!! literally thought i was gonna die from not being able to keep ANYTHING down! thank god i made it & my girl was awesome enough to go to a pharmacia & get the proper medicine for me. it actually turned out that 3 outta 5 of us threw up at some point in the trip, all of us had the runs at some point though. (this pic is of a caramelized banana & cheez pizza i had...this didnt make me sick & it was good bc they didn't use pizza sauce)
- strangers are super fun!! going to salvador & morro were great but experience was enhanced 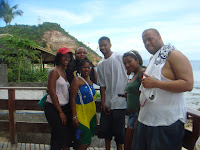 bc everyone was cool. there were 5 of us, all strangers- well not really, i knew my friend from hu, she knew 1 of the guys from high school, he knew the other 3 boys bc they all went to morgan. our personalities meshed well & though we were only together for a week, i'm gonna miss being around them. told them i better see them again (2 are in bmore & the other is in newport news, my friend's in dc). it was totally like real world/road rules except we didn't fight, we didn't have sex w/ each other & no one cried (hey who says ya can't do an all black cast of real world)?! (a pic of the brazil crew + the girls in the green shirt who was our brazilian contact/guide for the week) 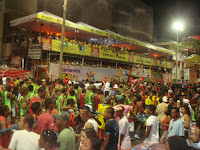 - i love traveling. bc i'm an army brat & moved a lot when i was younger there was a decade where i never wanted to move and/or travel anywhere, just wanted to be stationary...obviously i've out grown that! though i got super sick towards the end & that tainted my whole view of the trip, i totally love being in a new place & checking out new cultures! plus bc salvador was originally a stopping ground on slave trade, a lot of the folks that live there are of a darker hue. i was told i fit in several times, so i believed it & was happy that i could "pass" :) (this pic shows a ridiculous amount of people & a view of what a typical street looked like during carnaval...this looks like the timbalada bloco but can't remember) 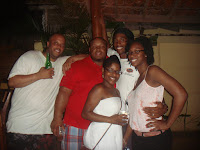 - my years of spanish paid off & i knew more than i thought. to me portuguese is a mix between spanish, french & long e's & nasal sounds (i'm sure this isn't the most politically correct observation of another language). b/c i speak fluent spanglish (yep thats "spanglish" not "spanish") i was able to pick up a lot quicker, plus i had a few conversations w/ brazilians who couldn't speak any english, so i picked up a lot there too (thank god for nonverbal language, body language, mannerisms, etc.) (in this pick the guy behind me is a black guy from brooklyn who was o so happy to see us & speak english! guess you don't realize how powerful communication is until there's a handicap you must over come) 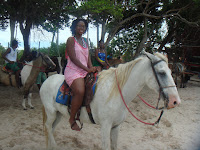 well, thats all for now... i'm sure i learned a lot more, but too tired/weak/jet lagged to continue. so w/ that i end & go back to sleep :)

Sis, what an awesome trip...after Jamaica and Ethiopia, that will definitely have to go on the list. I'm glad you weren't "too shy."